The Bobcat (Lynx rufus or Felis rufus) is a very adaptable animal that is widely distributed in North America. Locally it has expanded its range into populated areas, even into residential areas in cities as large as Calgary. These small wild cats are found in somewhat warmer climates than some of their larger kin (the lynx and cougar). Like other wild cats, they are strong, silent hunters living and hunting among rocks and bushes, and in well treed areas. Generally, they are rarely seen by people when in more remote environments, although the city dwellers are more likely to be “caught” going about their daily activities by observant humans.

Bobcats range from 12 to 24 inches high (30-60 cm), and 25 to 32 inches long (64-82 cm). They weigh just 15 to 35 pounds (6.8 to 16 kg), with the female being somewhat smaller than the male. Most Bobcats are grey to brown with dark spots (for camouflage), with a white underbelly and short, black-tipped tail. The cat is named for its tail, which appears to be cut or “bobbed.” They have well-whiskered faces, black tufted ears and longer back than front legs.

If you find an injured or orphaned wild bird or animal, please contact the Calgary Wildlife Rehabilitation Society at 403-214-1312 for tips, instructions and advice, or look at the website at www.calgarywildlife.org for more information. 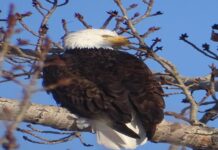