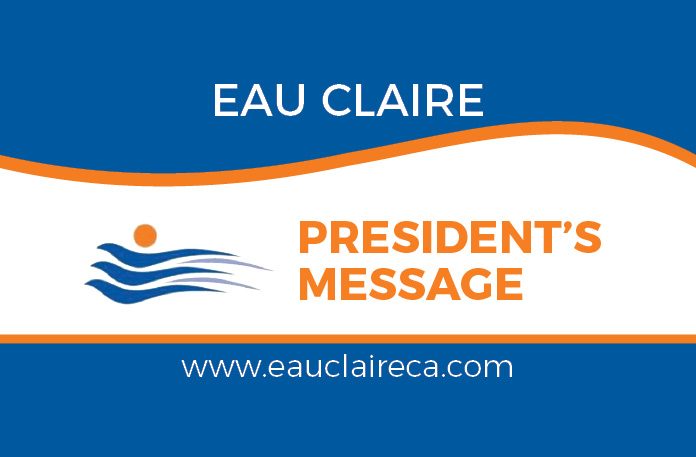 We’re now officially into the summer season, which, although normally an active time for the community, is a quiet time for the ECCA Board. Earlier this year, we were quite excited about some ideas for more community events we’d hoped to engage residents with, but then the coronavirus came along, and we had to put a lot of our plans on hold. I can at least announce that we have been able to set a tentative date for our Annual General Meeting on Thursday, September 24. Obviously, that’s subject to change, but keep that date open and plan to come to get an update on what’s happening in your community.

I don’t know if it’s because of the coronavirus, the slow economy, or the return of warm weather bringing more people out, but I’ve had reports of what seem to be more minor security incidents in the vicinity of some of our buildings. For the most part, these have been relatively minor, more failed attempts than anything, and Eau Claire remains one of the safest communities in the city. But it’s a reminder that we all have a part to play in being careful and observant.

As I write this, one of the hottest topics in the city has been the decision about whether or not to proceed with the planned Green Line LRT, and on what route? The proposed route lies on our eastern edge, potentially seriously interfering with the condominiums at the north side of the current Eau Claire Market by 2nd Street. Depending upon how any new bridge across the Bow River from 2nd Street is built, there will be obvious issues for that part of Prince’s Island Park and the whole appearance of the river valley as well.

In discussions with the city and with other neighbouring communities about the Green Line, ECCA has tried to emphasize three key concerns: (1) minimize impacts on and provide fair treatment for residents potentially affected by its construction; (2) protect the wild character and the appearance of Prince’s Island Park, the River Valley, and the River Pathway; and (3) support the potential of the Green Line, with a station at the foot of 2nd Street to promote the redevelopment of the Eau Claire Market as a new major retail, entertainment, residential and commercial hub for the community.

In the meantime, enjoy the summer, and stay safe.