My Calgary - August 1, 2021
RANCHLANDS MORTGAGE BROKER: SAVE A BUNCH OF CASH! As a local mortgage professional, I have helped your neighbors navigate their purchase, refinance, and renewal options....

What’s Happening in Ranchlands in August

Ranchlands Community Association - July 31, 2021
What’s Happening at the RCA:RCA Room/Space Rentals: We are pleased to say that we are open for rentals! Please send all rental inquires to the...

MP Pat Kelly - July 31, 2021
Over the summer, my staff and I have transitioned back to working together in the office and have enjoyed resuming in-person meetings and events in...

MLA Prasad Panda - July 31, 2021
July 1 marked Alberta’s much anticipated full reopening. This past year and a half has been filled with challenges, opportunities, and stories of both struggle...

My Calgary - July 12, 2021
Ranchlands Crime Activity was Up in June 2021 The Ranchlands community experienced 6 crimes in June 2021, in comparison to 3 crimes the previous month, and...

MP Pat Kelly - June 30, 2021
My staff and I have worked hard throughout the pandemic to assist constituents in various ways. Some have needed help with accessing federal benefits, others...
Load more 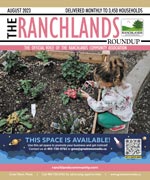 Ranchlands residents are actively engaged in their community and keeping them informed is our top-priority. Your Ranchlands Roundup is the official community newsletter, and covers community news and is published monthly to keep content current and relevant. Delivered to every household, apartment, and business, every resident is acquainted with the community’s most important information.

The Ranchlands Community Association was created to help our valued residents discover their neighbours. Ranchlands is a fantastic small NW Community in Calgary Alberta. There are two elementary schools, lots of services, parks, playgrounds and community spirit. Its mission is to spread joy and the spirit of Community.
The community of Ranchlands is bounded to the north by John Laurie Boulevard, to the west by Nose Hill Drive NW, to the south by Crowchild Trail and to the east by Sarcee Trail. The name of the community refers to the ranching heritage of the foothill region. Ranchlands was annexed in 1961, however it did not develop until 1977. The primarily building form in the area i