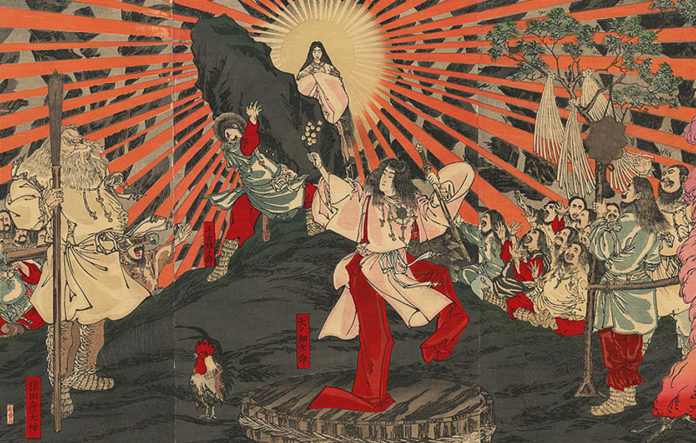 I have a hard time deciding if Japanese mythology is stranger or equally as strange as Western mythology. Western myths can be bizarre and disturbing when you take the time to think about them, but we’re familiar with the stories, so they don’t seem so out there. But I’ll let you be the judge. This month, you guessed it: Japanese mythology! Specifically, three gods from Shintōism: Amaterasu, the sun goddess; Tsukuyomi, the moon god; and Susanō, the god of storms.

Amaterasu, Tsukuyomi, and Susanō were born after their father, Izanagi, returned from the underworld, Yomi, in an unsuccessful attempt to revive his dead wife, Izanami. He needed to purify himself and when he washed his face, he gave birth (as one does) to his children. Amaterasu out of his left eye, Tsukuyomi out of his right eye, and Susanō from his nose. Now, spontaneous generation is not an unusual origin of gods and goddesses in any mythology, but what always struck me as odd was the stories about these siblings. Both brothers each have a relationship with their sister, but I’ve never come across as story where they interact with each other—if such a story ever existed, either I can’t find it or it has been lost.

Susanō and Amaterasu have a very aggressive sibling rivalry. According to the stories recorded in a work entitled Kojiki, Amaterasu was selected by Izanagi to succeed him as the sovereign deity. Outraged by this, Susanō challenged Amaterasu to a competition, of which Amaterasu was declared the winner. Further angered, Susanō went on a rampage, flooding and destroying the gods’ rice fields. He also threw a flayed pony (gross) at Amaterasu’s loom, destroying it and killing her servant in the process.* Amaterasu was so traumatized by this whole experience that she locked herself in a cave and refused to come out, which created lots of problems for everyone because she is the sun goddess. She was eventually coaxed out when the gods threw a rowdy party outside the cave, which piqued her curiosity. When she came out again, and the sun shone once more, the other gods decided it was probably best for everyone if Susanō was kicked out of the heavenly plane, Takamagahara. Eventually, Amaterasu and Susanō reconciled when he presented a sword—acquired on one of his adventures on the earth—to Amaterasu as a gift.

Tsukuyomi and Amaterasu’s relationship, on the other hand, was more of a Cersei and Jamie Lannister sort of relationship, if you catch my drift. But they too had a falling out, which was never reconciled. Amaterasu had sent Tsukuyomi as her representative to a feast hosted by the goddess of food, Ukemochi. Ukemochi had prepared the food for the feast by transfiguring herself into various places that held food—the ocean, a forest, a rice field—and then as those places pulled food out of her mouth, nose, and from—ahem, where the sun doesn’t shine. Even though the food looked delicious, Tsukuyomi was so disgusted that he killed her.** Amaterasu was furious with Tsukuyomi and absolutely refused behold his face ever again. And this is why the night and day are separate and the moon and sun never rise and set at the same time.

Given the tumultuous relationships, short fuses, and overreactions, I can only imagine how Tsukuyomi and Susanō got along. But now you know a little bit about some of the earliest known deities in Japan’s native religion. Be careful when you wash your face before bed tonight.

*I have so many unanswered questions about this. Why a pony of all things? Was that culturally significant to the listeners of this story? Did Susanō kill the pony, or did he just happen to find a dead flayed horse lying around? Why was it flayed? Who flayed it? Why did he throw it at Amaterasu’s loom—was that deliberately targeted, or is that just where it happened to land? Was the loom significant? Who was this servant?</em