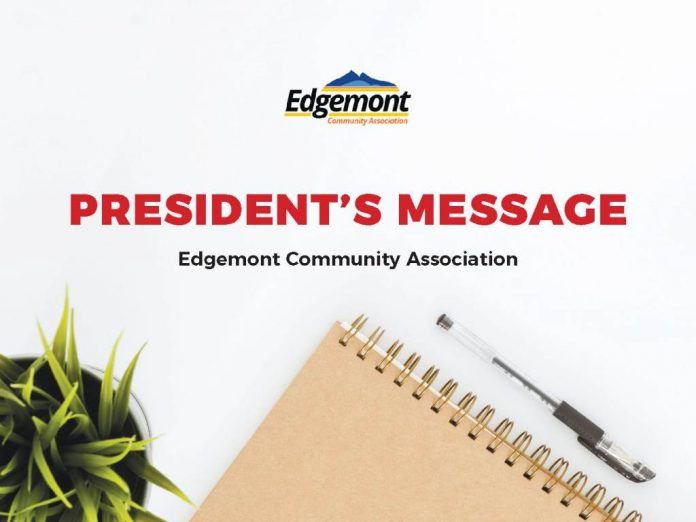 In these slower days of summer and ECA board activity, I thought I’d share with you a little of my personal history and relationship with our Edgemont community.

Our family arrived in Calgary almost a quarter century ago due to a change in jobs for me. I was born and raised in Hamilton, Ontario. My career was based in the chemical industry with stops in Sarnia, Ontario, Michigan, Texas and finally Calgary. Upon arrival in Calgary we sought out a place to live. My job required operating from two locations, one near the airport and the other downtown. We were also enamoured with the Rockies, so wanted easy access. Our real estate agent was quite astute and after exploring several locations in Calgary she steered us towards Edgemont as the ideal place to meet our expectations. Edgemont at that time was one of the top-rated communities in the city. There were a number of excellent homes for sale in the area and the decision was made. A decision we have been most happy with.

Initially, with an active family, including three teenagers and a very demanding job and associated travel, interest in community association activity was minimal. Over the years though in spite of Edgemont’s continuing vibrancy, I noticed a gradual decline in community appearance. A particular sore spot for me was our entrance sign for Edgevalley. Over the years this sign had deteriorated severely to the point that one morning when driving home early I almost ran into a chunk of the sign that some vandals has tossed into the street. This was a call to action for me and my first engagement with the Edgemont Community Association and its board. Unfortunately, the Edgevalley sign was too far gone and had to be removed. The board asked if I could take on the task of assessing the situation of signage in our community. This I did with the help of a neighbour volunteer. We inventoried every sign in the community and rated their condition. A strategy was developed and is now part of an overall common area beautification objective connected with ECA Vision 2022.

The loss of the Edgevalley sign and my emerging involvement in community affairs didn’t stop here. With the sign gone there was now a concern about the empty spot left behind. This coincided with a growing concern by many residents about the appearance of our community in general and thus the genesis of our now successful LEAF program. Again, I felt the need to get involved and took an active part in the massive campaign to implement the LEAF program in Edgemont. I enjoyed working with a spirited group of volunteers and personally rang a hundred door bells in the Edgebrook and Edgeridge districts. I met many wonderful residents. This got me hooked on the power of volunteerism in our community.

On the basis of the LEAF success, the next step in my journey was to stand for nomination to the ECA Board and was gratified to be elected and ultimately take on the role as your president. With my training in industry and my skill sets, I feel that I have brought a visioning and strategy building perspective to our board. In doing so there was a need to shift the board’s activities to one of governance and less of hands-on doing. We are well on our journey of transition. My other experience from industry and being involved on many boards of all shapes and sizes was the need to build a strong operation base. This we have done with the installing of a general manager and support staff.

So now with almost 25 years of living in Edgemont and in my third term on the ECA board, I can say that my family and I have benefited immensely from the quality of life in this community. So much so that our oldest son when he married and started his family, decided to purchase a home in Edgemont. We are now only a five-minute car ride from his family and our two young granddaughters, the oldest of which attends Edgemont Public School. It doesn’t get much better than that.

Thank you, Edgemont, for continuing to be the best place to live and thrive in and thank you to all the volunteers who help make it so. I am looking for many more years of the same as a proud Edgemont resident.