Scotsman’s Hill is a landmark in Calgary’s skyline and the most distinctive geographical feature of the Ramsay community. The hill lies between a steep escarpment along the Elbow River and a valley to the east. Both the valley and escarpment are believed to be abandoned meltwater channels created around 12,000 years ago when the ancient glacial Lake Calgary drained.

Scotsman’s Hill is remarkable as a rare, intact hillside in the inner city. Its expansive natural slope recalls Calgary’s frontier period when the landscape was dominated by river valley escarpments and gentle hills covered in fescue grasses. Until the latter part of the 19th century, the grasses on the hill attracted vast herds of bison, which in turn attracted the first peoples to the area.

Scotsman’s Hill possesses personage value for its earliest landowners and homesteaders, Angus Fraser and Louis Roselle. The hill was called Fraser’s Hill in Calgary’s frontier days and may have been named for Scottish-born Fraser, a Hudson’s Bay Company (HBC) storeman, Fraser opened an outpost west of the city on the Bow River in 1874. When the RCMP established Fort Calgary in 1875, he relocated the post across the Elbow River and eventually became manager of the post in 1878.

Louis Roselle (1821-1891) and his wife Angelique, both Métis, were among the earliest settlers in East Calgary. They constructed dwellings, stables, a corral and a warehouse, and cultivated three acres of land on and around the northern end of Scotsman’s Hill. Roselle had moved west from Montreal in 1842 to work as an HBC employee in Calgary. After 26 years of service in the west, he worked independently, first as a buffalo hunter and later as a freighter. In 1880, he acquired land which spanned today’s Ramsay and Inglewood from Métis homesteader Antonie Godin. Following the CPR’s arrival in 1883, Roselle sold his claim to Wesley Orr.

Scotsman’s Hill is also historically valued for its association with an early Ramsay quarry. Around 1894, the northern end of the exposed sandstone escarpment at the base of the hill became the Elbow River quarry, which yielded blocks of hard grey sandstone. It was operated by John G. McCallum, a contractor from Scotland who operated a number of Calgary quarries.

For well over a century, the hill has served as an important recreational site for Ramsay residents. From the early 1900s the western slope of the hill, a dense brush of indigenous species such as wild rose and Saskatoon berry overlaid with a lattice of pathways, was a favourite playground for local children. In the 1940s, the hilltop lots at the edge of the cultural landscape became a close-knit community of Ramsay families, mostly railway employee households, who built their homes to take in skyline views. It was valued as an ideal place to raise their children, who said it was like growing up in the country.

As a vantage point to watch the rodeo and fireworks, Scotsman’s Hill possesses event value for its association with the Calgary Stampede since 1912. With its excellent situation overlooking the grounds across the river, as well as the early orientation of the grandstand, the hill quickly earned the nick-name Scotsman’s Grandstand for the economical folks who watched the Stampede without paying. This may also be the source of the hill’s name. 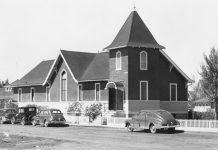